The remaining 3 kits have just been activated on the website. These kits are as follows:

/kit cobble – upon activating this kit, by doing /kit cobble you will receive 8 stacks of cobble. You can run this command once every 24 hours. To permanently activate this kit for your account press the add to cart button below and follow the instructions.

/kit wood – upon activating this kit, by doing /kit wood you will receive 1 stack of wood (Oak) logs. You can run this command once every 24 hours. To permanently activate this kit for your account press the add to cart button below and follow the instructions.

/kit redstone – upon activating this kit, by doing /kit redstone you will receive 1 stack of redstone. You can run this command once every 24 hours. To permanently activate this kit for your account press the add to cart button below and follow the instructions.

Keep in mind, these are donations you’re giving to support the server.  Thank you! The upgrades to your in-game account on this server are permanent (i.e. will never expire).

In addition, I’ve been asked a lot to put in another way to obtain beacons through a donation. Beacons have just been added and you will find them in the Item Packs.

As promised yesterday, 6 new kits have been added to the server. Half of them are already active.

/kit sapling – this is aimed at new players that get unlucky and miss on their sapling from the first tree. If you need a sapling, to /kit sapling and get one. Cooldown – 24 hours.

/kit lavabucket – this too is aimed primarily at new players that make a mistake when building their cobble gen and turn their lava into obsidian, but it will benefit everyone. To get your lava bucket, to /kit lavabucket. Cooldown – 3 days. 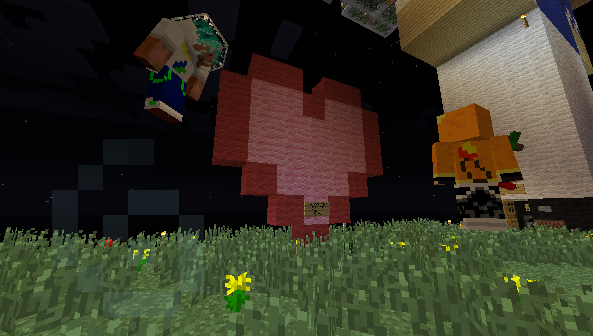 Valentine’s Day Heart made by JamesFizzy

Last but not least, based on your suggestions in the skyblock forum there’s /kit valentine

To find out what’s in the kit, you’ll have to log in game and check yourself. This can only be used once per player, and will expire on Monday.

The other 3 kits and more will go live tomorrow.

Tomorrow’s Valentines day. As it’s a custom on the server, I’ll be adding a new kit specific to this holiday in-game, based on the Valentines day kit suggestions from you in the forums.

There are 5 new kits that will be added – aimed from beginner players to accomplished veterans – and other items that were requested by a lot of players. Watch the website and in-game messages in a few hours when these will go live.

I don’t often mention things before they’re deployed on the server. However, a lot of great things are cooking. It’s time you have a sneak peek on several major milestones…

These last 2 items will completely change the way you play skyblock. I pretty much guarantee you’ll love it.

Player p..s and m….s will be coming to skyblock in the near future.

Just started or already a veteran? Your skyblock island is small, or doesn’t have a mob farm? Need XP or mob drops? Feeling brave enough? 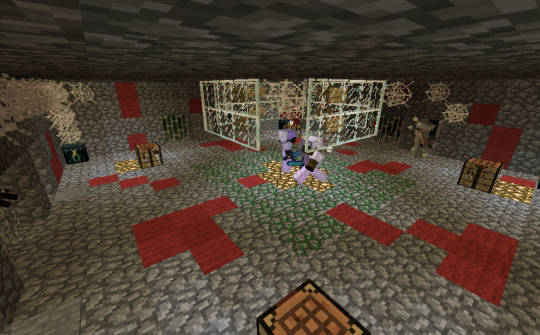 Forge your best weapons and armor, get ’em brewing stand brew, gather yer guts and prepare to battle. When ready do

When you walk out those doors, all protections are off (Note: pvp is disabled and not allowed!). It’s just you, your weapon and your friends watching your back!

On the most distant corners there are 4 level 30 enchantment tables. If you can reach them and survive long enough, get your items enchanted for free there.

You can earn lots of XP and mob drops fast, or lose everything just as fast. It’s just up to your combat skills to keep you alive. Everything you can grab including items dropped by other players upon their death it’s yours to keep. If you can get out alive!

Spend some time in there, learn the map and you’ll find out some places are easier than others. Who knows? You may even find that elusive perfect farming spot with minimal risk of death.

Following the recent questions, and confusion, in game about warps, who owns a warp and the ability (or not) to rent them, here’s the official position on this. Take a cup of your favorite (non-alcoholic if you’re a minor!) drink and have fun reading…

I always allowed donators to set their warp at another island than the one they’re member of, provided the island owner agrees.

If the donator asks for some compensation for doing so (as in renting) it’s their own problem as long as they’re in game benefits (i.e. he can’t rent it for real money) and generally we (moderator team or myself) don’t get involved in this other than setting the warp when asked to.

At the same time to protect our moderators time to help players I set a cool-down of 2 real calendar weeks (not in-game time) on warp location changes. At the discretion of the moderators that can set warps or myself we can move it even if the cool-down has not passed, but what we “guarantee” is we’ll always move it once every 2 weeks if they ask. Personally, I didn’t keep track on this and unless someone asks me to move their warp daily, I generally do it but I don’t ask the moderators to do the same. Up to them.

Third point to keep in mind… the warps, as well as all other donator perks, are their own and not transferable for the lifetime of the server and as long as they comply with the rules and don’t get banned. From an administrative point of view no agreement they do with other players can override this. It’s up to each donator if they temporary allow other players to use their warp but from my point of view no other player can “own” these rights.

The right to /fly, access to their rank commands (/kit, etc) and the in-game forum color associated with their donator rank can never be transferred to another player (there is only an allowed exception to this, but it has been requested and done only once, and not worth mentioning here as it’s not specific to warps)

Here’s the second part, and sometimes it goes hand in hand with the above…

What always separated us from other Minecraft servers out there is that we care for the player, and more specifically the person behind the in game character. I’ve always went the extra mile to provide a safe and enjoyable experience on this skyblock server. Treat everyone equally, fair and with respect, and the way I’d like to be treated back.

That’s why I’ve written custom plugins such as the Animal Protect, World Protector, safe trade, best anti-grief and anti-theft rollbacks and so forth.

From this point of view, when I hear of a player treating another player unfairly I’ve moderated this, be it abusive behavior, taking advantage of another player trust and so forth. When the incident is minor, I let the players sort it themselves.

Now, back to warp “renting…” If there’s an in game agreement that a donator allows temporary access to their own warp, and receive in game items or virtual currency for this, and if the agreement is breached by one of the parties I step in.

It’s the donator right, and always be, as warp owner to set it wherever she wants (with a few restrictions mentioned already). If there was an agreement and the donator received in game items or currency and later on decides to break the agreement, she must return the in game payment or items received. If she does not of her own will, I will step in and return them to the payee myself. I do the same for other agreements of large (perceived) in game value, not just for warps.

Important: for me to be able to protect both parties of an agreement, the agreement terms must be mentioned in public chat and agreed by both parties (no private /msg) and there must be some sort of log of the items or currency being transferred from one player to the other. All /pay transactions are automatically logged, for items of large value, either the receiver says in public chat that she received the items or use a trusted mediator (one of the moderators or myself).

TL;DR: The donator always owns the warp, and no in-game agreement can give the right to transfer ownership. We will move the warp when the owner asks us to, provided certain restrictions are met (cooldown and agreement to set it, if not on their own island). If that donator received in game items or virtual currency to leave the warp set for a period of time (or indefinitely) and later changes his mind the donator must return the items or currency of their own will or I will return them just like with any other transaction of high value (provided we have clear logs of the agreement happening, and items/currency being transferred) that due to technical limitations cannot be done through the safe trade.

Hope this clarifies the subject of warp owning and rentals for everyone.