In the past days I’ve been working on a little plugin that will help especially new players find out about the minigames we have running on Skyblock. Check it in-game and let me know what you think.

Here is a small teaser of how it looks: 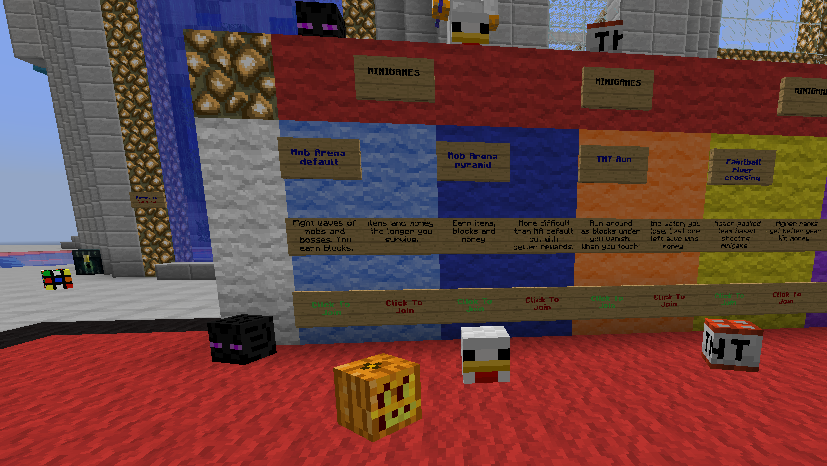 There’s a lot more that will be changed at spawn in the next few days.

Over the last few days based on player feedback I’ve applied the following changes:

Thanks everyone that submitted suggestions and bug reports.

A new server has been added to the MCSpaceCraft network! It’s an adventure / survival / PvP type of server with emphasis on surviving as over 500 players have already found out the hard way 🙂

Main rules:
PvP is on in Nether and in the End and off in Overworld. However it is still possible and allowed to kill other players in Overworld with traps. Griefing and stealing is allowed everywhere on the server except in protected claims.

TNT is allowed. It damages players and mobs but block damage is turned off. Mob griefing is off so endermen, creepers and withers don’t damage blocks. Crop trampling and fire spread is also off.

For a complete list of rules please do /rules in game and read the game rules at spawn.

It was opened in Beta a week ago and almost all reported bugs have been fixed. Thanks everyone that submitted bug reports.

World border is currently set at approximately +/- 5000 centered on spawn and will be increased in future when needed.

There are still a lot of things planned to be added during next week to make your adventures exciting. Some of the planned features: player shops in a village next to spawn, timed quests you have to complete in the given time to earn rewards, and many more that I will announce at a later time.

To reach the server do /server survival or take the portal from Skyblock.
Do you have what it takes to survive?

As promised, you can now talk cross server with your friends. This is enabled by default, and looks like this:

The yellow prefix is the server code so you know where your friends are actually playing.

Finally, if you want to know if your friend is actually online but on a different server in our network than you, do /glist. It will show players grouped by server.

Because of the cross server messaging, your old ignore lists no longer work. So if you want to ignore someone, you have to re-ignore them with /ignore playerName. To see your current ignore list, do /ignorelist.

There will be many more changes regarding cross server functionality in the near future.